A year of innovation and achievement

Australia Awards – South and West Asia recorded many notable achievements in 2018, while introducing a number of innovations that significantly enhanced the experience of Australia Awards scholars, Short Course participants and alumni.

‍All completing scholars and Short Course participants satisfied the requirements of their study program, either to be granted their formal degree or to receive a certificate of course completion, and all returned home on conclusion of their studies.

In five of the six participating countries, over 50% of scholars selected to commence studies in 2019 were women. Across the region, with 55% of Scholarships being awarded to women and 6% to people with disability, the Program exceeded notional gender and disability inclusion participation objectives.

The inaugural Scholars Forum, conducted under the banner LEARN | LINK | LEAD, brought together just under 60 scholars in Canberra along with representatives of the Australian Government, the South and West Asia diplomatic corps, and the higher education and business sectors in support of the development of institutional and people-to-people links between Australia and the region.

Informal Learning Opportunities were offered to 40 recipients in a broad range of sectors, including Agriculture, Disability, Economic Development, Health and, most prominently, Human Rights.

Regional and country-level alumni engagement was effective in encouraging greater collaboration for development in South and West Asia while at the same time nurturing alumni links to Australia. In particular, the Regional Alumni Workshop, which took place in Bhutan, was the catalyst for a number of important alumni-driven environmental and climate action initiatives, the beneficial outcomes of which continue to resonate into 2019.

Over 90% of alumni reported that they were passing on their new skills and knowledge to others, including introducing improved practices and innovations in their workplace. Thanks to increased efforts in story capture and development, the contributions of individual alumni were increasingly acknowledged and celebrated. 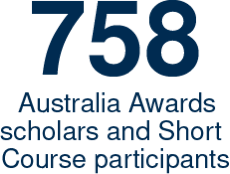 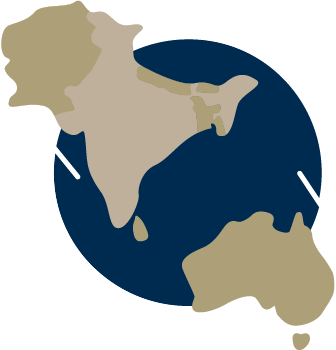 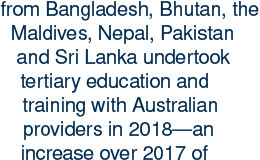 Outcomes at a glance 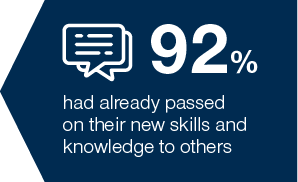 Outcome:
Australia is viewed as a valued international partner 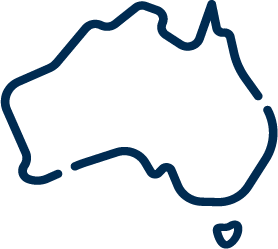 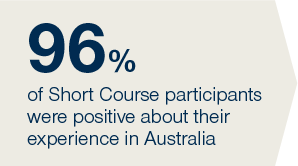 “As I come to the end of my first year in Australia, I want to highlight just how amazing it has been. It has exceeded all my expectations... I am fortunate to experience all of it thanks to Australia Awards.

“I want to make the most of the opportunities I receive here and take what I learn and discover to improve the lives of others. I want to be a leader who creates opportunities for others, and helps others see their potential.”

“While in Australia, I have developed linkages across three sectors: economic development, education, and arts and culture. I hope to use my knowledge, skills and networks to help promote Sri Lanka as a tourist destination, thereby aiding the economic development of the nation.

“I am forever grateful to Australia Awards; it is nothing less than a dream come true for me to study here. I have had a wonderful time so far. The Australia Awards team has always been there for the scholars with assistance, support and advice.”

The approach to Australia Awards Scholarships in 2018 was notable for an array of new initiatives, well-targeted promotions informed by a revised Gender Equality and Social Inclusion strategy, and effective in-Australia support.

Four hundred and twenty-one scholars from across the region —a 38% increase over 2017 in the size of the cohort—were supported in Australia, with an increased focus on professional networking and the establishment of sustainable linkages.

Regular in-Australia newsletters were introduced, to provide scholars with resources and information to enrich their experience in Australia and to help them make connections.

An inaugural Scholars Forum, innovative in concept and effectively delivered (see page 9), provided further opportunities for scholars to identify and develop institutional and people-to-people links between Australia and the region.

All completing scholars successfully satisfied the requirements to obtain their Australian degree and returned home ready to implement their Development Impact Plans.

Effective promotional activities and selection processes identified a cohort of future leaders to commence their studies in Australia in 2019. New initiatives involving digital communications campaigns and social media advertising helped ensure that promotional efforts reached the target audiences. Campaigns were supported by profiles of successful alumni and a range of other new accessible resources, including illustrative videos that received more than 5,000 views. 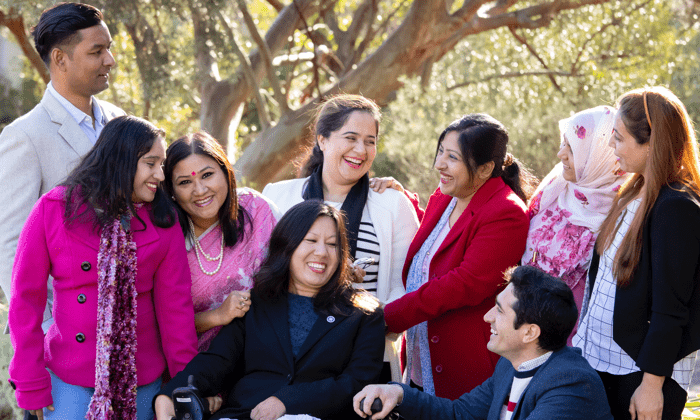 A strong focus on inclusion in promotional activities and selection processes ensured that 55% of the Scholarships for studies commencing in 2019 were awarded to women, with women being selected for at least half of the available Scholarships in five of the six participating countries. Women applicants and recipients were supported in many cases by the local chapters of the Australia Awards Women in Leadership Network.

Twelve scholars with disability were selected and commenced studies in 2019, including a scholar from Bhutan who was interviewed through a sign language interpreter.

Marginalised ethnicities were a further target group in some country programs: in Nepal, almost half of the new Scholarships were awarded to applicants from targeted ethnicities.

“Australia Awards not only is helping me enhance my knowledge in power engineering but also has given me the opportunity to build networks and linkages at both personal and professional levels.

“The Scholars Forum was an important event where we, the scholars, got the opportunity to meet and get to know each other closely. We were able to share our visions towards driving change in our countries and the work we have done so far, till now, to achieve it. Here, I made connections that I will value throughout my life.”
‍
-Wangmo (Bhutan)
Master of Engineering Science
University of Southern Queensland
commenced 2018

Strengthening links between Australia and South and West Asia

LEARN | LINK | LEAD was the theme of the inaugural Australia Awards – South and West Asia Scholars Forum, which brought together 58 scholars from the region in Canberra in October 2018. Designed to support institutional and people-to-people links between Australia and the region, the Forum proved to be an effective vehicle for engaging scholars and for furthering Australia Awards’ public diplomacy objectives within Australia.

An enhanced focus on Gender Equality and Social Inclusion, a greater number of participants, and further improvements to systems and processes were key areas of progress in the short-term training portfolio in 2018.

A focus on inclusive practices in course design and participant identification ensured that, for the first time, more than half of Short Course participants were women. 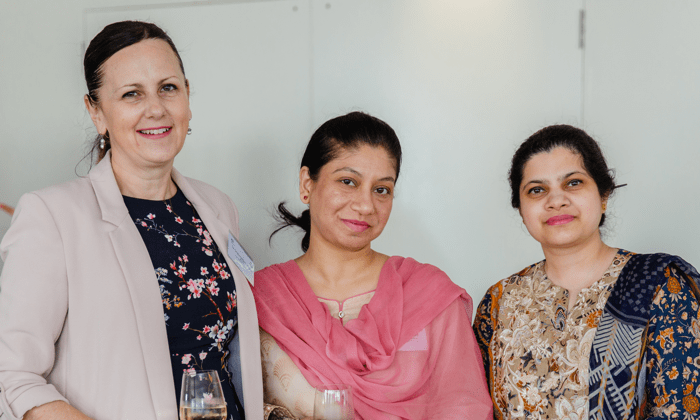 Flexible responses to immediate training needs were provided through Informal Learning Opportunities, including:

“My Australia Awards Scholarship was a thoroughly life enriching experience. Not only did I get a world-class education, but I also made lifelong friendships, developed excellent professional linkages and found inspiring mentors.

“I am so grateful for my Australia Awards experience, which is now helping me create a positive social impact for youth and people with disability in my home country.”

A truly transboundary regional Australia Awards Short Course in water management in South, Central and West Asia included participants from both within and outside of Program countries. The Supporting Water Security and Cooperation in South Asia: Integrated Water Resources Management Short Course helped facilitate and encourage greater learning and cooperation in a field of vital importance to the region.

In line with a commitment to support strong Australia Awards alumni communities, an extensive program of alumni engagement activities, initiatives and events was conducted throughout 2018.

Participants of the successful 2018 Regional Alumni Workshop in Bhutan have continued in 2019 to achieve substantial environment and climate action-related outcomes in the region.

Approximately 2,000 alumni attended one or more of the regional and country-level engagement events conducted during the year. These included:

Alumni Disability Initiative Grants were introduced in Nepal, supporting outcomes including: training visually impaired youths on the use of assistive technology; supporting educators for learners with disability; and supporting leaders of Disabled People’s Organisations to increase their understanding of laws and policies.

The Sri Lanka Association of Australia Awards Alumni was particularly active, with initiatives including fundraising, the development of school libraries, and the establishment of provincial chapters.

The WiLN, launched through the Regional Alumni Workshop in 2015, is increasingly active. The WiLN’s national chapters assisted in promoting Australia Awards to potential applicants, mentored new recipients, and engaged in a range of activities to promote and support women’s empowerment in local communities.

In Pakistan, a Mentorship Development Program was introduced, and an online campaign profiling 24 of the most active members of the WiLN was launched by the Australian High Commissioner to Pakistan and the Australian Ambassador for Women and Girls, the Hon. Dr Sharman Stone. 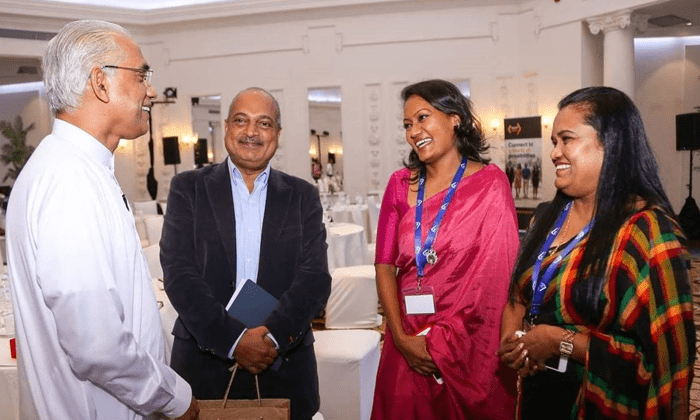 The alumni database was further developed, and
high-achieving alumni were acknowledged, such as Aisha Jalil (Pakistan), who was named in the 2018 Muslim Women in Sports Powerlist as one of the 30 most influential Muslim women in sport in the world. It is also noted that the Prime Minister of Bhutan and five of his ten Cabinet Ministers have studied in Australia, as have six serving Cabinet Ministers in the Maldives.

My time in Australia was life-changing. The experience made me more familiar with pressing global issues but it also instilled in me transformative leadership skills and confidence. My experiences beyond the classroom reframed my attitudes and views; I learnt how to adapt to new and complex environments.

“I experienced a truly egalitarian and progressive environment in Australian society—where everyone is provided with equal opportunities regardless of their differences. I came to the right place for my education.”

“Thanks Australia Awards for providing me with an amazing opportunity. Australia is no doubt a wonderful country and the people are so welcoming.

“I have developed a deep understanding of disability policy and practice. I am now well-equipped with new knowledge and improved approaches to help deal with the challenges people with disability face in fulfilling their dreams.”

Alumni as champions for the environment and climate action

More than 40 Australia Awards alumni from South and West Asia were in Thimphu, Bhutan, in November 2018 to contribute to the Australia Awards Regional Alumni Workshop, Australia Awards Alumni as Champions for the Environment and Climate Action. Alumni groups—the majority of which were issued with grants earlier in the year—represented 16 environment and climate action initiatives to benefit Afghanistan, Bangladesh, Bhutan, the Maldives, Nepal, Pakistan and Sri Lanka.‍

The Australian Government has proudly supported emerging leaders from developing countries in accessing a high-quality education and life experience in Australia for over 60 years. Currently, the key delivery mechanism for providing this support is Australia Awards.

Australia Awards are a central pillar of Australia’s investment in people-to-people links with its partner nations—enhancing mutual understanding, cooperation, growth and stability in our region.

Australia Awards equip recipients with the skills, knowledge and networks to drive change and contribute to the economic and social development of their own countries and regions.

Key objectives for Australia Awards are the empowerment of women and the inclusion of people with disability and individuals from traditionally marginalised groups.

In South and West Asia in 2018, Australia Awards opportunities were open to eligible nationals of Afghanistan, Bangladesh, Bhutan, the Maldives, Nepal, Pakistan and Sri Lanka.

Recipients of Australia Awards become part of the Australia Global Alumni network, connecting them to Australia and to each other—building a global network of leaders and advocates and establishing a network of ambassadors for Australia and its first-class education system. 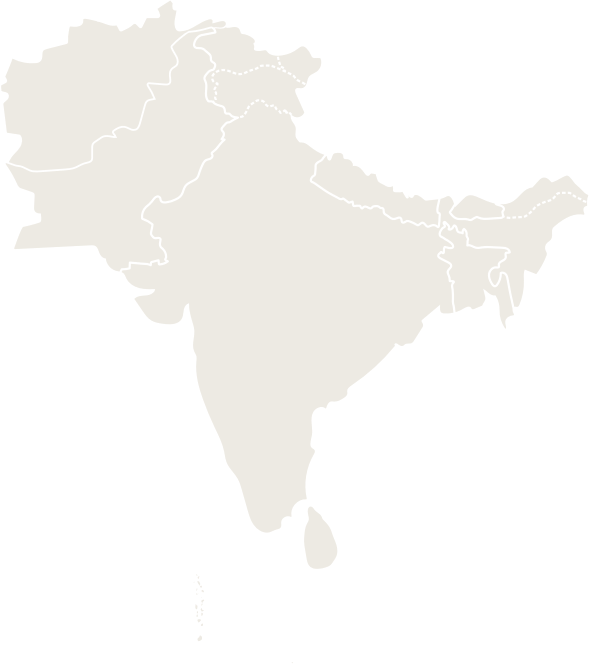 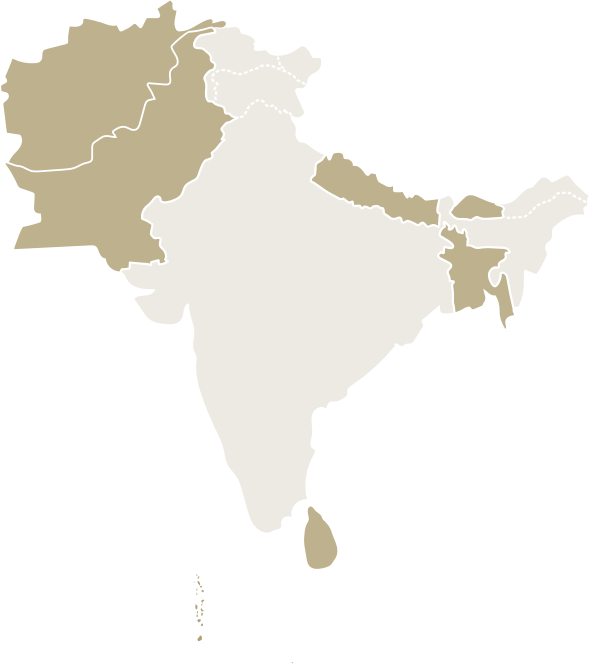